Gold climbs to three-month high, Xetra-Gold to new high for 2019 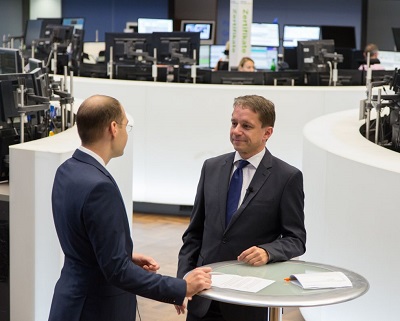 Please note that this week’s report comes a day early and was written on Thursday morning. Once again throughout the week, investors have kept an eye on further developments in the various conflicts threatening trade policy. At the end of last week, President Trump charged to a new front in threatening Mexico with tariffs if it failed to reduce the influx of migrants to the southern US border. The fact that tariffs can be imposed arbitrarily and not for economic but domestic political reasons, and to the apparent pleasure of the US President, shocked market participants.

As a result, many investors continue to expect the Fed to change course this year. On the futures exchanges in Chicago, at least two Fed interest rate cuts until the end of 2019 are now priced in with a probability bordering on certainty, and even three cuts are expected at a 57 percent probability. These speculations were fuelled by Fed Chairman Powell’s statements, who had indicated that the Fed would cut interest rates, if necessary. In addition, data on the US labour market was weak yesterday (Wednesday), with US firms creating only 27,000 new jobs in May, according to the private employment agency ADP. Analysts had expected a good five times as many.

This immediately resulted in further declining yields / market interest rates for government bonds considered safe. At 1.77 per cent, yields on two-year US government bonds fell to their lowest level since December 2017 and significantly below the current level of 2.38 per cent. This also temporarily weakened the US dollar, as the interest rate advantage of the US over other countries is thus diminishing. However, yields on ten-year German government bonds also fell yesterday to a new record low of -0.23 percent.

Expectations of lower interest rates and a weaker US dollar of course boosted the gold price until Wednesday afternoon. Wednesday evening's rally in yields and the US dollar, and the pressure on currencies of gold-producing countries such as South Africa and Australia were, however, rather counterproductive.

In US dollars, gold traded at 1,294 $/ounce on Friday morning last week. As late as Friday afternoon, it rose above 1,300 $/ounce and then climbed day by day to a three-month high of $1,344/ounce on Wednesday afternoon, just US$3 below the annual high. On Wednesday evening, however, the gold price retreated and it currently (Thursday morning) stands at $ 1,331/ounce.

Xetra-Gold thus also saw gains over the course of the week, rising from 37.35 €/gram last Friday to 38.25 €/gram on Wednesday afternoon, a new annual high. In has since dropped and rebounded to 38.10 €/gram this morning.

Tomorrow (Friday), the markets will take a close look at the official US labour market data, and of course keep an eye on the trade conflicts.

I wish all our readers a relaxing Whitsun weekend.